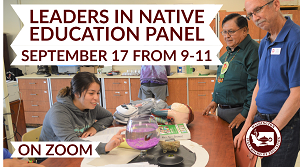 In about one week, on Thursday, September 17 from 9:00 - 11:00 a.m., SBE Board Members will host leaders in native education for a panel discussion on compact schools, school mascots, the Since Time Immemorial curriculum, and more. The panel will be facilitated by Bill Kallappa (SBE Board member), and will feature panelists Jon Claymore (OSPI Office of Native Education), Joe Davalos (Superintendent of Chief Kitsap Academy), Jerad Koepp (Native Student Program Specialist for North Thurston Public Schools), Willie Frank III (Nisqually Tribal Council), and Hanford McCloud (Nisqually Tribal Council). Members of the public are welcome to attend and pose questions on Zoom. Find bios for these outstanding panelists below:

Jon Claymore is the Director of Native Education for the Office of the Superintendent of Public Instruction for the state of Washington. Jon has over thirty years of experience working in K-12 education as a teacher, coach, and administrator in the K-12 public and Bureau of Indian Education schools throughout the Pacific Northwest. Jon was born in Crow Agency Montana, grew up in Fort Yates North Dakota on the Standing Rock Reservation and is a member of the Cheyenne River Sioux Tribe in Eagle Butte, South Dakota. Through his close work within school systems, Jon exemplifies his motto of “going the distance and making a difference in the Native youth of today and the leaders of tomorrow.”

Joe Davalos is the Superintendent of Chief Kitsap Academy. He is an advisory member of the Suquamish Tribe/Olympic College partnership and created a program to offer college courses on that reservation. Joe is also a committee member on the coordinating council with Sea Discover/WWU/ Marine Science Center and was appointed to the first University of Washington College of Education Indigenous Education Advisory Board (IEAB). He is a member of the statewide committee on OSPI Early Learning federal legislation to replace no child left behind with ESSA, every student succeeds act. His school, Chief Kitsap Academy, applied for and was awarded the first Tribal Compact School in the United States. The graduation rate for Chief Kitsap is one of the highest in the state 95-100% annually.

Jerad Koepp (Wukchumni) has over 12 years professional experience in Native American Education. He earned his Master’s in Teaching from the Evergreen State College in 2008 while specializing in Native Education and is certificated in history and social studies. Since 2013, he has proudly served as the Native Student Program Specialist for North Thurston Public Schools. In his role, he provides cultural and academic support for approximately 250 Native American students from over 50 tribes, nations, bands, and villages in his school district. His training and support also extend to district staff in the areas of Native education, culture, policy, and advocacy. Jerad is currently leading the development of his district’s growing Native studies program.  He also serves his district as the tribal liaison to local tribes, fostering and developing strong relationships with tribal partners. Jerad also serves on the board of the Western Washington Native American Consortium as secretary.

Hweqwidi Hanford McCloud grew up in Nisqually and Yelm. He says growing up on the reservation was a good learning experience, learning about tribal sovereignty, self-governance, and knowing treaty rights as a hunter, diver and fisherman. He loves to be outdoors in the woods and on the river in the canoe on the Salish Sea. As an artist, he loves to weave baskets and hats of people that were made for thousands of years and comes from a basket weaver family as his great grandmother was a weaver. He says, “making baskets and hats have changed my life for the better. I also grew up making paddles and carving small things out of cedar wood and yellow cedar wood…” Hanford has worked for the Nisqually tribe for many years and is currently sitting on tribal council.

Willie Frank III is a Nisqually Tribal member. Willie has been on Tribal Council since 2009 and was recently elected for a 3rd term. Willie graduated from Evergreen State College in 2007 with his B.A. in Native Studies. Willie was elected to Tribal Council at the age of 27 and was one of the youngest elected to Nisqually Tribal Council. Willie loves working for his people and carrying on his father’s work and message. Both of Willie parents worked in strong leadership roles. His mother Susan Crystal served under Governor Lowry and Governor Locke as one of the top Health Care Advisors. His mother passed away in 2001. His father, Billy Frank Jr., spent his whole life working towards protecting Tribal Treaty Fishing Rights. His father passed away in 2014. Willie continues his father’s message but also knows he must pave his own way. Willie believes in working together for the habitat and environment. He says “I believe we need to work toward moving our tribe forward while continuing to protect our treaty rights and tribal sovereignty. I believe that our salmon and natural resources are still the foundation for who we are today.”