During a Board meeting this fall, Dr. Linda Darling-Hammond, President of the California State Board of Education, and CEO of the Learning Policy Institute visited the SBE and presented about the ideas in a recent article “Restarting and Reinventing School Learning in the Time of COVID and Beyond.” She was able to touch on many points, but one of the most engaging was her view on the importance of relationships between educators and their students.

“Relationships are the antidote to trauma and creating relationally organized schools is another opportunity we have…we need to have the smaller more fundamental relationships and we can reinvent schools, when they are back in full force, and in different ways than they were designed in the 1920s,” said Dr. Darling-Hammond. 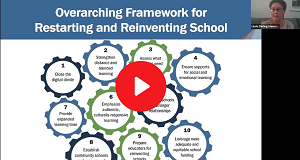 She also touched on the importance of culturally responsive and implicit bias training for educators.

“There’s a lot of teacher training needed to get to a place where people have had both the opportunity to reflect on their own frameworks, to develop empathy and to reflect on implicit bias…where part of what you’re learning to do is make sure you’re identifying how you can connect with each student—how you can build a positive relationship with the student, how you can make sure every student feels safe and has a sense of belonging in the classroom.”

According to Darling-Hammond, teachers must be proactive in dismantling social identity threat. Teachers need to learn to be proactive and say, ‘I see you; I value you’ to their students regularly, and they must create common ground.

Dr. Darling Hammond gave a few examples of what this might look like in the classroom including an exercise where students write letters to their teachers. At the beginning of the schoolyear, students can write about what they want to accomplish in learning, what they want their teachers to know about them. Then the teachers answer those letters. According to Darling-Hammond, by using strategies like this, students’ grades are much higher.

“It’s making the gesture to say, ‘I care about you, I see you, and I am going to respond to what you tell me.’ I now see you as more than either someone I identify with or someone other than who I identify with,” Darling Hammond shared.

In teacher education at Stanford (where Dr. Darling Hammond is a professor), beginning teachers are encouraged to make positive phone calls to each family early in the year.

“They say things like, ‘I noticed that your child helped another student or that they had an interesting idea.’ It completely changes the dynamic. You have that relationship, and you need to establish relationships,” said Darling Hammond.

These are only a few small examples, but they highlight that there are strategies to achieve stronger relationships between educators and their students, and that has lasting impact on learning.

You can watch the portion of the retreat featuring her presentation, and Board member discussion and questions on Zoom.

More about Dr. Darling-Hammond:
Dr. Linda Darling-Hammond is the Charles E. Ducommun Professor of Education Emeritus at Stanford University where she founded the Stanford Center for Opportunity Policy in Education and served as the faculty sponsor of the Stanford Teacher Education Program, which she helped to redesign.

In 2006, Darling-Hammond was named one of the nation’s ten most influential people affecting educational policy. In 2008, she served as the leader of President Barack Obama’s education policy transition team.

Darling-Hammond began her career as a public school teacher and co-founded both a preschool and a public high school. She served as Director of the RAND Corporation’s education program and as an endowed professor at Columbia University, Teachers College. She has consulted widely with federal, state and local officials and educators on strategies for improving education policies and practices. Among her more than 500 publications are a number of award-winning books, including The Right to Learn, Teaching as the Learning Profession, Preparing Teachers for a Changing World and The Flat World and Education. She received an Ed.D. from Temple University (with highest distinction) and a B.A. from Yale University (magna cum laude). She is currently the President of the California State Board of Education and CEO of the Learning Policy Institute.