Approximately one year ago, the SBE, OSPI, and EOGOAC agreed to suspend school recognition for one year in order for a workgroup to be formed for the purpose of redesigning the school recognition system. The rationale to redesign the system was driven in part by the changes brought about by the shift to the Every Student Succeeds Act (ESSA) accountability system and by the desire of the organizations to make the school recognition system more equitable. The now outdated Washington Achievement Awards were based on measures, some of which are no longer computed, that tended to be highly correlated to the school Free and Reduced Price Lunch (FRL) rate. In the past, the state made 450 awards in seven categories to nearly 300 schools. Most awards went to schools with lower than average FRL rates in the Puget Sound region and many schools received multiple awards. The SBE, OSPI, and EOGOAC all agreed that a change was needed.

SBE, OSPI, and EOGOAC staff worked closely together in consultation with the recognition workgroup and each of our respective organizations to design a pilot recognition system as the first phase in the development of a new recognition framework for Washington that incorporates state level and local information to identify schools that are exemplars in terms of growth and achievement. Unlike prior recognition frameworks, this approach is designed to identify schools throughout the continuum of support. As such, this revised framework will recognize schools that have made gains in targeted areas and are on a path toward overall improvements in achievement and growth. The Framework describes a single system of recognition that incorporates three pathways to recognition, and multiple measures within each pathway. 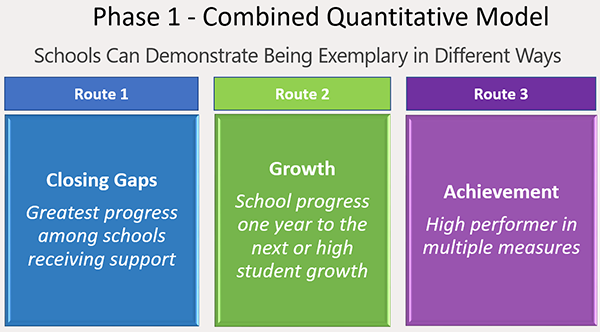 First Phase of the New State School Recognition System (May 2019) 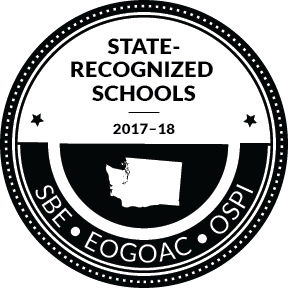 The use of multiple stages or paths and multiple measures provides schools with multiple ways in which to qualify for recognition. The approach is summarized as follows:

If you would like to view a more detailed description of the three routes to recognition or see more about the statewide results from the Phase I School Recognition Methodology, view our methodology page.

The three approaches resulted in the recognition of 216 schools:

Please note: Schools who were unable to attend the June 6 celebration can pick up their banners at their local ESD.